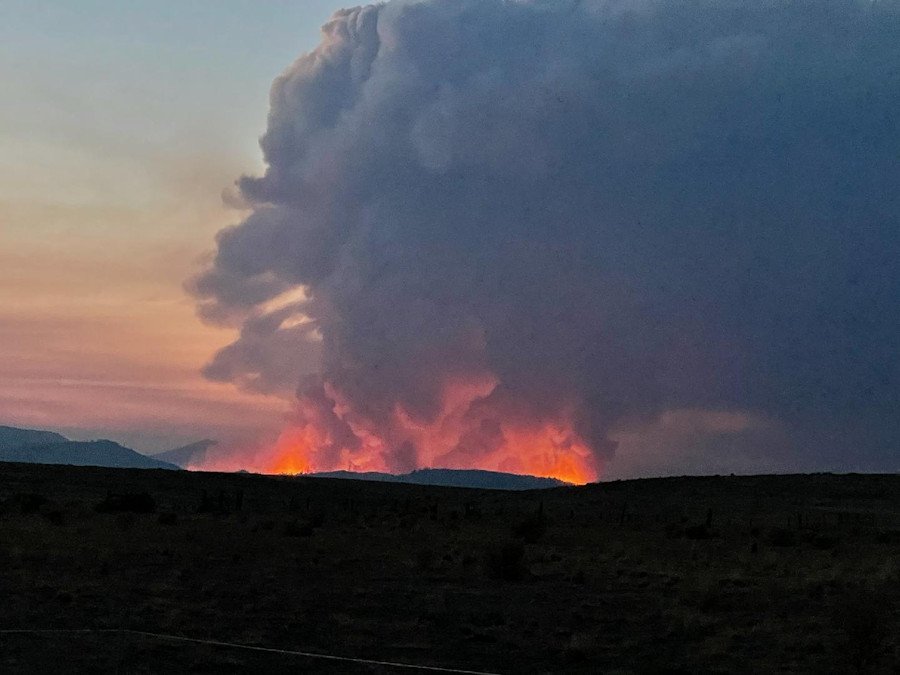 LAKEVIEW, Ore. (KTVZ) – A new wildfire broke out Tuesday afternoon 15 miles northwest of Lakeview and traveled 1,500 acres by nightfall with no signs of slowing down, said officials.

The Cougar Peak fire was reported around 1:45 p.m. in the Lakeview Ranger District of the Fremont-Winema National Forest.

The fire was estimated at 1,500 acres, without containment. The fire behavior is active, with races, fires and spots in a mix of evergreen and brush, officials said.

The cause of the fire is under investigation. Land protected by the Oregon Forest Department is also at risk.

Wildland firefighters continued to fight the blaze into the night, with many resources on order. A type 2 incident management team has been commissioned.

Turbulent winds affected air resources on Tuesday. Despite this, at one point, five heavy tankers dropped retarder to slow the fire in the afternoon and evening.

Smoke from the fire is highly visible along Oregon State Highway 140 between Lakeview and Quartz Mountain, as well as along US Highway 395. Smoke from the Cougar Peak fire is also impacting communities of Paisley, Valley Falls and the Summer Lake area.

Drivers were advised to use caution due to increased traffic from forest firefighting equipment and the possibility of reduced visibility due to smoke. Area residents and visitors have also been urged to avoid using logging roads near the fire, including Logging Road 28 and Logging Road 3870, also known as Cottonwood Road.

Recreation sites in the area have been closed, including the Upper Cottonwood Campground, approximately 1.5 miles west of the fire and the Cottonwood Creek Trailhead. The campground was evacuated Tuesday afternoon by Lake County Sheriff’s Deputies.

The Lake County Sheriff’s Emergency Management Office and Incident Commander have identified areas for Level 3 (Go Now) and Level 1 (Be Prepared) evacuations in the fire area.

Level 1 (DO YOU TAKE – Residents should prepare for a possible evacuation.)

Residents and visitors to the area were reminded that public use restrictions are still in effect in the Fremont-Winema National Forest, along with fire restrictions in effect on neighboring landscapes.

Fire danger remains “extreme” in Lake and Klamath counties. Extremely dry fuels and seasonal winds can quickly turn a small spark into a large forest fire. These fires can be destructive, leading to evacuations, damage to property and natural resources, and affect the safety of the public and firefighters.

The public is responsible for ensuring they have reviewed and are aware of the restrictions in place for the landscape they plan to recreate or work on. For all agencies, violating these bans could result in citations, fines and even jail time, depending on the agency and the ordinance.

The latest restrictions and regulations, including for ODF and federal agencies, are available at https://scofmp.org/restrictions.shtml.