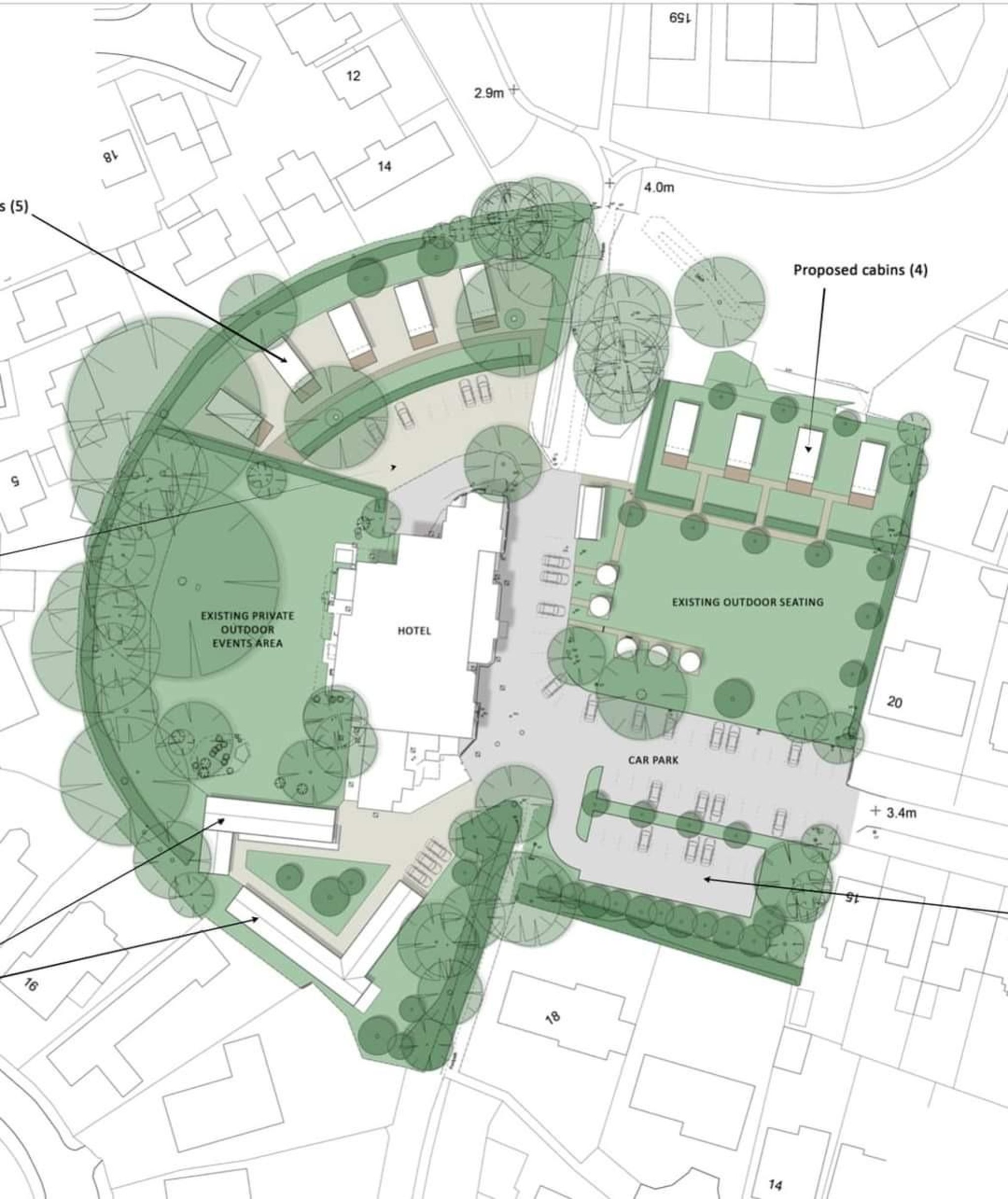 The owners of the 16th Century Vine Hotel have submitted a development application to East Lindsey District Council for a change of land use to the new site. huts, construction of two buildings comprising 13 additional night rooms and extension of the existing car park.

A statement of support says the local plan ‘supports extensions to existing holiday accommodation sites’ and that ‘the proposed development would cause minimal harm and not outweigh the significant benefits to the local business and economy’.

However, a number of opponents have already come forward, including a former Skegness councilor, John Byford, who has lived in the area for 30 years.

Plans have been submitted for an extension and addition of lodges to the 16thC Vine Hotel in Skegness.

Mr Byford took the time from his current visit to Skegness’ twin town of Bad Gandersheim, where he is helping to settle Ukrainian refugees, to urge the public to take a close look at the plan and speak out before a decision is made.

He told Lincolnshire World: “I have lived in Seacroft for nearly 31 years and have seen this beautiful and historic building, and the beautiful grounds in which it sits, slowly ‘scarred away’.

“I and others were concerned when the trees were removed from the beautiful grounds and now I can see why.

“It’s a historic building where Tennyson once walked (Come to the Maud Garden).

“I could never understand why the hotel didn’t get listing status when the Ship Hotel and City Hall did – it’s almost as if the hotel has slipped through the net.

“We lost too many historic buildings, including the pier and the stationmaster’s house, which many people later regretted – the city shouldn’t lose another.

“It’s not just the building – it’s the setting. The map of the hotel is in the wrong area – this site has been part of a quiet part of Skegness for 100 years, linked to Vine Walk and Coronation Walk.

“I believe the hotel guards have a duty to protect this building and its surroundings, but this plan turns it into a glorified mini caravan park.

“I am for progress, but this is the destruction of a historic building.”

Further information in the statement of support indicates that the hotel is protected from its neighbors by a combination of fences and mature walls.

“There are three elements in the proposal,” he says. “First of all, it is proposed to install five cabins in the northwest car park and four cabins on the northern half of the old bowling green. Cabins are mobile constructions built on an axis and are considered for planning purposes as caravans.

“As part of the existing northwest car park will be used, it is proposed to modify and extend the car park to the front/east of the hotel. This area is already used for overflow parking. strip of landscaping will be added to the south of the parking lot to protect neighboring dwellings.

“The third strand will involve demolishing some dilapidated outbuildings and replacing them with two buildings, providing a total of 13 additional guest rooms. One of the buildings will be ‘L’ shaped and single storey high. The other building will be mostly two stories and will also have an “L” shaped floor plan, with a total of 10 of the bedrooms being on the ground floor and only three on the first.

The statement concludes: “The Local Plan supports extensions to existing holiday accommodation sites, and this is reflected in the permissions that have been granted since its adoption.

“The proposed development would cause minimal harm, and it would not outweigh the significant benefits to the business and the local economy.”

At the time of writing there were 13 letters of objection with some documents not available.

However, in support of the plan, ELDC confirmed that the Flood Alert and Evacuation Plan, which advises on this

measures must be taken in the event of flooding, is “fit for purpose”.

Another neighbor commented: “The last thing Skegness needs is the wrong kind of development.

“It’s a peaceful place to walk, have a drink or eat.

“However, the bigger picture they’re offering in seems to make it a site, like a caravan site.

“It is not necessary. Other houses on Vine Road will also suffer. The road will not support traffic, let alone construction

The Vine Hotel is one of the oldest buildings in Skegness, built and established in 1770.

A known haunt of smugglers in the 18th and 19th centuries, creating a more sinister history at La Vigne.

It is believed that a tax official investigating such activities traveled to the area, resulting in his death at the hands of disgruntled smugglers.

A skeleton was found in the masonry some 100 years later when the hotel was undergoing a complete renovation. There is further supporting evidence due to the fact that several gold buttons bearing the royal insignia, part of a customs officer’s standard dress, were found with the skeleton.

More recently, the building has been renovated to highlight its existing historic features, while maintaining a warm and welcoming ambience”.

Currently the Vine has 25 en-suite bedrooms of varying standards, where many stars performing along the coast have stayed over the years.