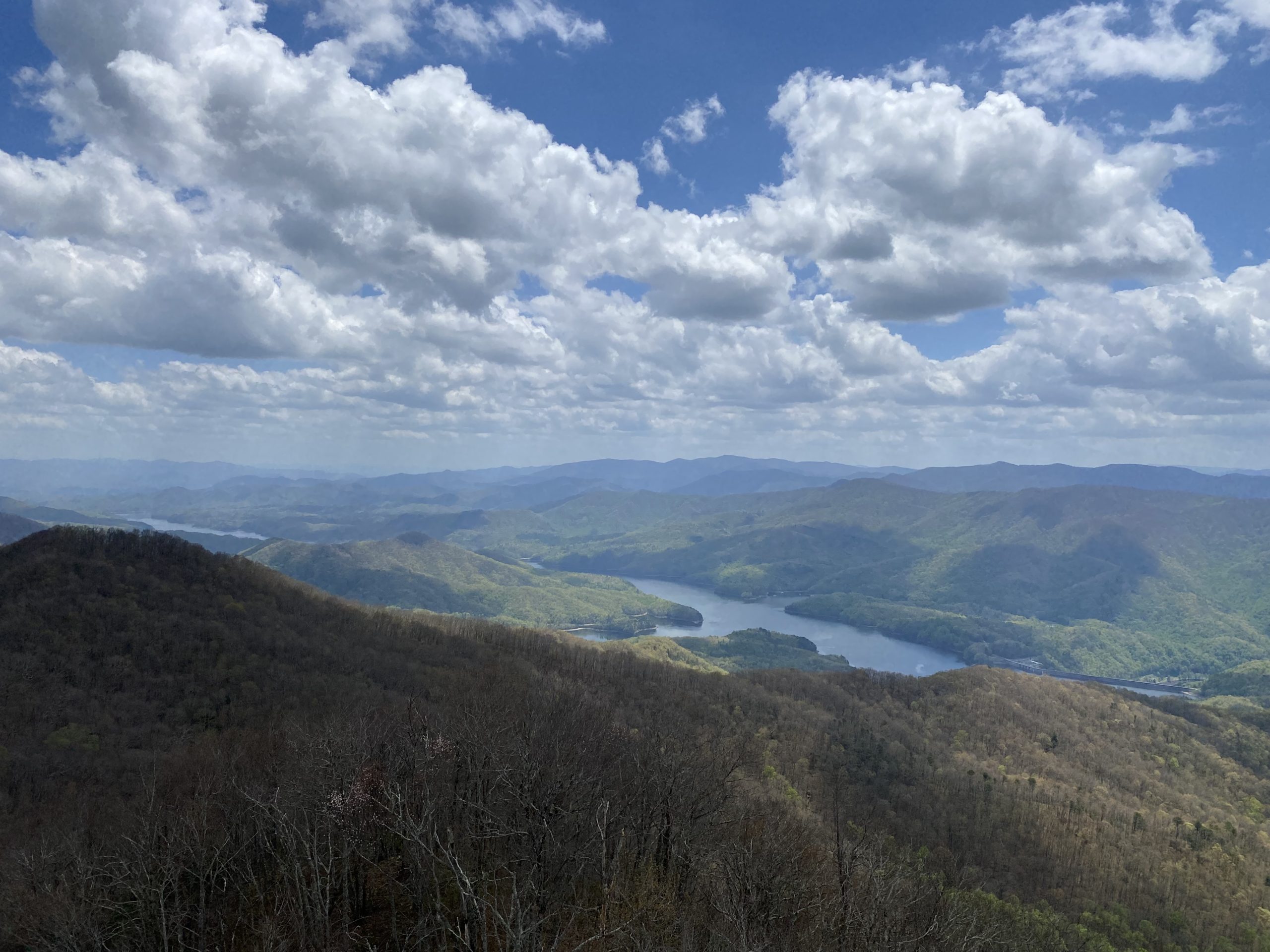 The Fontana dam shelter had a fabulous view of the lake which I enjoyed while cooking breakfast.

Dragon Queen and I left together. It was a drive up the road to the Fontana Dam which is the tallest in the eastern United States. Shortly after, we entered the Great Smoky Mountains National Park. It was a difficult task and my bag was heavy with six days of food. I lost track of Dragon Queen as I had a faster uphill pace. For the first two hours, I held on by promising a lunch break when I reached the Firetower. The tower was the tallest I’ve encountered and offered stunning views of Lake Fontana, the dam, and the tree-covered hills.

In the early afternoon, I went down to a campsite to get some water and met Dragon Queen. Unfortunately, she missed the tower. We walked together for the rest of the afternoon; chatting made the climb better. We have a lot of similarities, like being the same age and trying to eat healthy on the trail. She is originally from Latvia.

Eventually we reached Mollies Ridge Hut. The shelter itself was quite nice, a mix of stone and wood with a working fireplace. Instead of a toilet, there was a “toilet corner”. It was a sad sight, a hill dotted with TPs. Come on people, wrap it up or bury it!

The evening was fun. Psyched introduced himself and warned us about the boars. My four new friends from yesterday also did. The group of us sat and chatted over dinner. We didn’t stay awake after dark. I hung my Ursack on bear ropes for the first time. The forecast called for rain overnight, so I gave shelter while sleeping another attempt to avoid packing a wet tent.

I slept well until a guy woke up at 5:30. Since I couldn’t go back to sleep, I took the opportunity to keep a diary. Then it started to rain and I felt grateful because all my gear was dry inside the shelter! It became a fun hangout after several others rushed in with tents and gear, trying to stay dry.

After breakfast, Dragon Queen and I put on our rain gear and headed out into the drizzle. The rain varied in intensity, but was never heavy. We encountered the next shelter three miles later. Half a dozen people were packed inside. We stopped for a snack, stood by the crackling fire, then continued on. Saw my first AT deer. Around noon the rain subsided and soon after we had a quick lunch on Rocky Top. It was a beautiful sight, mountain peaks emerging from an ever-changing sea of ​​fog. 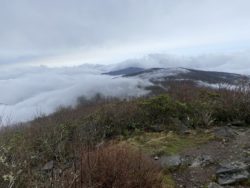 Even though it wasn’t raining, it was still cold with fog and dripping branches. My bag felt good on my body. Dragon Queen and I were both energized so we decided to do our longest day on the trail, 17.8 miles. The day totaled over 4,000 feet of gain, but the mix of highs and lows made it look less. We had sunshine and a cool breeze for the last two hours. Finally, the Silers Bald Shelter appeared.

We asked for places in the shelter. Putting up a tent seemed like too much work and the fire was inviting. I put on warmer diapers, cooked dinner, stretched a little and set up my sleeping area. No toilets again, the AT straddles the state line and apparently the shelters in North Carolina have them, but the ones in Tennessee don’t. This means that since last night, I added Tennessee to my list of visited states, yay!

It was cold last night, low 32 with a brisk breeze. Other than my feet, I was warm and slept decently. The wind stayed cold and the air was hazy, so I ate breakfast with my feet in my sleeping bag. I was too cold to get water and left my top three layers when Dragon Queen and I started the hike. We stopped at the next refuge. I got water and did laundry. It was a beautiful place, sunny, nestled in a gap, surrounded by fir trees. It was fun to see evergreens after a few weeks of deciduous trees.

The morning hike continued through an enchanted Fraser fir and red spruce forest. Everywhere the fallen trees were covered with a thick layer of moss. The sunlight was uneven and the slope gentle. Before noon we reached Clingman’s Dome and climbed the winding ramp to the viewing platform. Got a few pics then pulled out of the cold wind. Double exciting as the mountain marks 200 miles and it’s the highest point on the AT!!

The afternoon had several highlights. I saw a Salamander!!!! The park has 25 varieties so I wanted to see at least one. This one was black with red on the sides of the head. I gently moved him out of the way to safety. Then came the hillsides covered in Spring Beauty flowers. At Newfound Gap we relaxed on the grass with other hikers before tackling the final ascent. 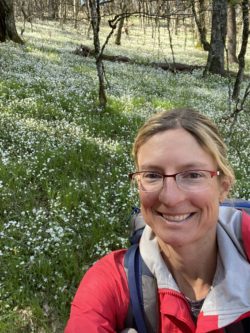 The Icewater Spring shelter has an amazing view which I admired during dinner. It also has a private!! This is the busiest hut I’ve been to, although in the Smokies tents are only allowed in huts so people tend to clump together. Dragon Queen and I grabbed the last two spots inside. I am on a sleep period in a refuge! The night was getting chilly so I quickly did my camp chores and climbed into my cozy nest.

I stayed warm, even my feet! When I poked my head out of my sleeping bag, a bright sun lit up the shelter. I soaked in the warmth as I made breakfast and rearranged my bag. It was one of my favorite breakfasts, Strawberry Almond Oats. I love the almond crunch and burst of flavor from freeze-dried strawberries.

It’s fun to have Dragon Queen as a hiking companion! We have a similar rhythm and pay attention to each other. It’s nice to share the beauty of a wildflower or admire a view. There were a lot of views today. The trail spent most of its time up and down ridge lines. We saw Clingman Dome in the distance and many tree covered hills. There were also patches of moss-covered forest where plateau mushrooms perched on tree trunks. 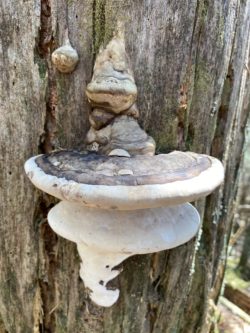 I considered camping until I saw the terrain around the rather steep Tri-Corner Knob shelter. There were lots of spaces inside. Psyched tries to sleep under cover for the first time. I’m torn if I like it. Ease and weather protection are nice; hum and noise are difficult. A ridge runner named Ricky educated us on the principles of leaving no trace. He recommended swallowing your toothpaste or spitting it into a trash bag. I tried the first, mint!

When I picked up my bear cable bag this morning, I realized my readers might have no idea what they looked like. Basically, you lower a hook, attach your bag, use the cable to raise the hook, and attach the cable to a pole to suspend the bag high above the ground. These cables are highly stressed due to the number of people in the shelter. 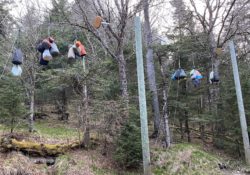 My last day of hiking in the Smoky Mountains. There were some climbs throughout the day, but overall it was a descent from 5900ft to 1600ft. We stopped at a shelter near the midpoint for lunch. Going to fetch water from the spring, I found more salamanders!! This time an adult and two cubs. A species different from the previous one because the coloration was a dark reddish brown. 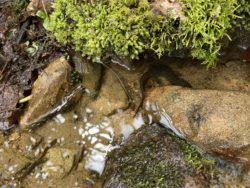 Shortly after lunch we took a side trail to the Mount Cammerer fire tower. It was a neat octagonal structure with a circular walkway, built out of hand quarried stone and wood. The view was amazing, although it was a little shocking to see civilization in the distance.

As we descended the woods became bright green and the undergrowth lush. It was a stark contrast to the still bare branches we encountered high up in the Smokies. At Davenport Gap, we met Psyched who was waiting for friends from back home to pick him up so they could camp together. We gave her a hug and then continued for about a mile. We found some nice campsites next to a gurgling stream. I smiled as I pitched my tent and climbed inside – home sweet home!

This website contains affiliate links, which means The Trek may receive a percentage of any product or service you purchase using the links in articles or advertisements. The buyer pays the same price as they would otherwise, and your purchase helps support The Trek’s ongoing goal of providing you with quality hiking advice and information. Thanks for your help!

To learn more, please visit the About This Site page.

Nights in a caravan at winegrowers