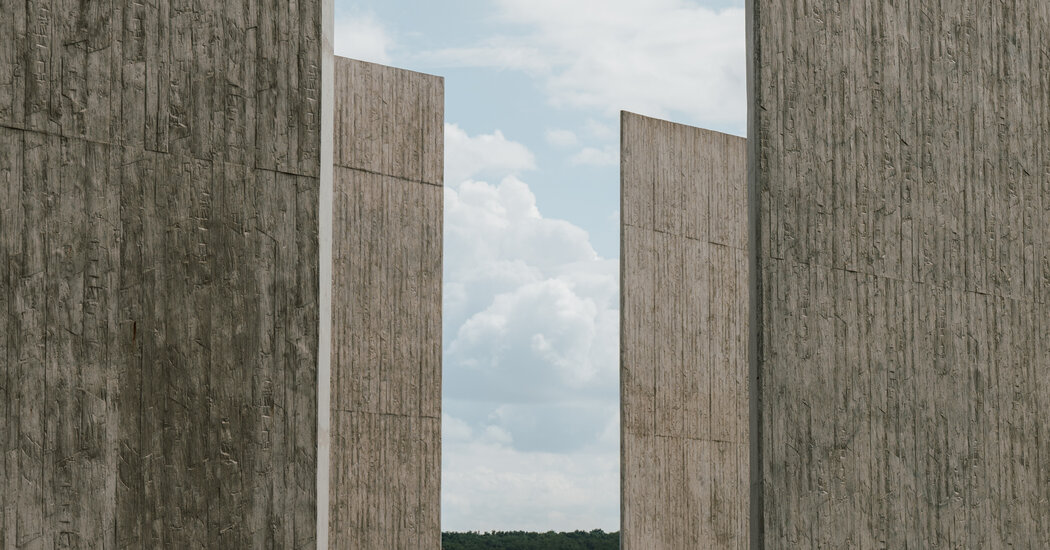 In Shanksville, preserving the memory of September 11 and the wars that followed

SHANKSVILLE, Pa .– When the plane crashed in the empty field north of town, schools left early. Katlin Rodriguez, 11 at the time, was waiting in a cafeteria full of crying and shocked classmates for her mom and stepfather to come and take her home. When they arrived they had brought a friend of the family. “Don’t worry,” said the friend, a teenager who announced he had just enlisted. “We’re going to have them. We are going to find those who did this.

On a heavy Friday morning, 20 years later, Ms. Rodriguez, now wife of a Marine and mother of a 6-year-old girl, was planting American flags in a small field not far from where Flight 93 landed. crashed outside of Shanksville, Pa. About a dozen people were with her, each flag they planted representing one of the 7,049 US servicemen who had died in the wars that have been fought since that late morning. summer in 2001.

“A lot of the kids I went to school with enlisted,” Ms. Rodriguez said, looking at the pitch. “It made many of us feel more connected to the bigger world.”

By the time the plane crashed in Pennsylvania, the world at large was already in shock. The streets of downtown Manhattan were filled with clouds of dust and terror, as the south tower of the World Trade Center had just collapsed. In Washington, federal officials and city residents braced for further attacks as flames poured out from the west side of the Pentagon. People across the country sat in shock in front of their televisions, waiting to find out which institution might be hit next.

Unlike the Pentagon or the World Trade Center, Somerset County, Pennsylvania was not a target on September 11, but a location Flight 93 flew over en route to the terrorists’ grim objective in Washington. People didn’t live in Stoystown, Friedens, or Shanksville, a small town with no traffic lights, because they wanted to be near the levers of world power.

But when the passengers and crew of United Flight 93 attempted to take control of their hijackers and the plane collapsed in the Pennsylvania countryside, Shanksville suddenly became a battleground in a international conflict. Once unthinkable, new tasks were now being imposed on firefighters, the county coroner, nearby state soldiers, the local historical society, neighbors living near the crash site and, across the country, but here above all, to the young people who suddenly found themselves coming of age in time of war.

“He was angry,” said Kathy Hause-Walker of her son, Brian, who grew up in Stoystown, a small village a few miles from Shanksville. “It was like being raped.” At 22, father of two children in September 2001, he enlisted in the Air Force in December. He was not alone.

In the first six years of the wars in Afghanistan and Iraq, according to research cited in a 2016 article in The University of Memphis Law Review, soldiers in Somerset County were wounded in action at a rate of over 97% American counties.

Staff Sgt. Brian Hause was sent to Iraq in 2008, said Ms Hause-Walker, who was collecting a bundle of flags to be planted this Friday morning. One of the flags on the field was for him; he died at a base north of Baghdad.

The land was part of a new memorial site called Patriot Park, located about a third of a mile down the road from the National Flight 93 Memorial. This memorial, managed by the National Park Service, sits on a tranquil expanse of over 2,000 acres and includes a museum, a wall engraved with the names of 40 passengers and crew, and an open meadow of thistle and goldenrod. It opened to the public 10 years ago and, with the 2018 unveiling of a wind chime tower called the Tower of Voices, is now complete.

The grand opening of Patriot Park, which is run by a group of local residents – some of whom are veterans, most of them retirees – took place last July. Ultimately, organizers envision a huge star-shaped plaza with bronze statues and etched brick walkways, but for now it’s run by local volunteers with power tools and free mornings.

In the first weeks and months after the attack, local commemorations sprouted all over Shanksville, erected by local residents and growing every day with the tributes left by the constant flow of visitors. A small, committed group in Shanksville, including those who had worked long days at the crash site, cooking meals for exhausted responders and collecting all the tributes left out in the sun and rain, quickly surrendered reckoned that they had become the main custodians of this story.

Donna Glessner, whose house shook from the impact of the plane, recruited people from her church to meet visitors to the site and explain what had happened, a group that became “flight ambassadors. 93 ”, some of whom volunteer at the National Memorial to this day. . She and her sister Kathie Shaffer worked on the National Park Service Oral History Project, interviewing hundreds of family members of the victims, government officials and local stakeholders, including Ms Shaffer’s husband, the Chief from the Shanksville Volunteer Fire Department, for the official report of the day and its aftermath. Their son Adam, who had always wanted to work for a historic park but assumed it would mean leaving his small hometown, is now the interpretive chief at Flight 93 National Memorial.

“I could see a need,” said Mary Jane Kiehl, former Flight 93 ambassador, in a 2007 interview Ms. Shaffer conducted for the oral history project. “I think people needed to receive as much information as we had back then – the truth, you know.”

Some, like Adam Shaffer, will become key figures in the national memorial. Many, like Ms Kiehl, withdrew when the National Park Service took over, believing something had been lost when the temporary memorials fell. Others remain determined to create or maintain more organic commemorations years after the official memorial has been consecrated.

The Flight 93 Memorial Chapel, a crowded collection of artifacts and relics first assembled by a Catholic priest in a former Lutheran church, is still open to visitors amid the cornfields on Stutzmantown Road. Atop a hill just outside the memorial, the Remember Me Rose Garden was completed after more than 15 years of work by a retired state soldier and a host of volunteers; on its grounds is a 16-foot-high wooden cross that had stood for years at the crash site, but was dismantled during the construction of the Federal Memorial. Not far away, on the grassy lawns of a salvaged open pit mine, is Patriot Park.

The morning of the planting of the flags, the American withdrawal from Afghanistan hovered over the work of the day; 13 flags had to be added after the suicide bombing at Kabul airport. It was not clear whether this was a memorial from an era of war over or in progress.

Some of those in the park that morning said it would never really end, not for people who had been fighting for 20 years or for their families. There was talk of suicides, drug overdoses, demoralizing national indifference. For every grieving family represented by a flag on the ground, Ms Rodriguez said, there were many more whose lives were still entangled in the war that had started in the air over Shanksville 20 years ago. years.

The family friend who greeted her in the car that morning ended up going abroad for several tours, she said. Each time he returned he seemed to have changed, growing suspicious and fearful. “He was convinced that the Taliban were still after him,” she said.

She doesn’t know where he is now. He moved some time ago.

Escape to the countryside: six picturesque villages in Leicestershire for a perfect…