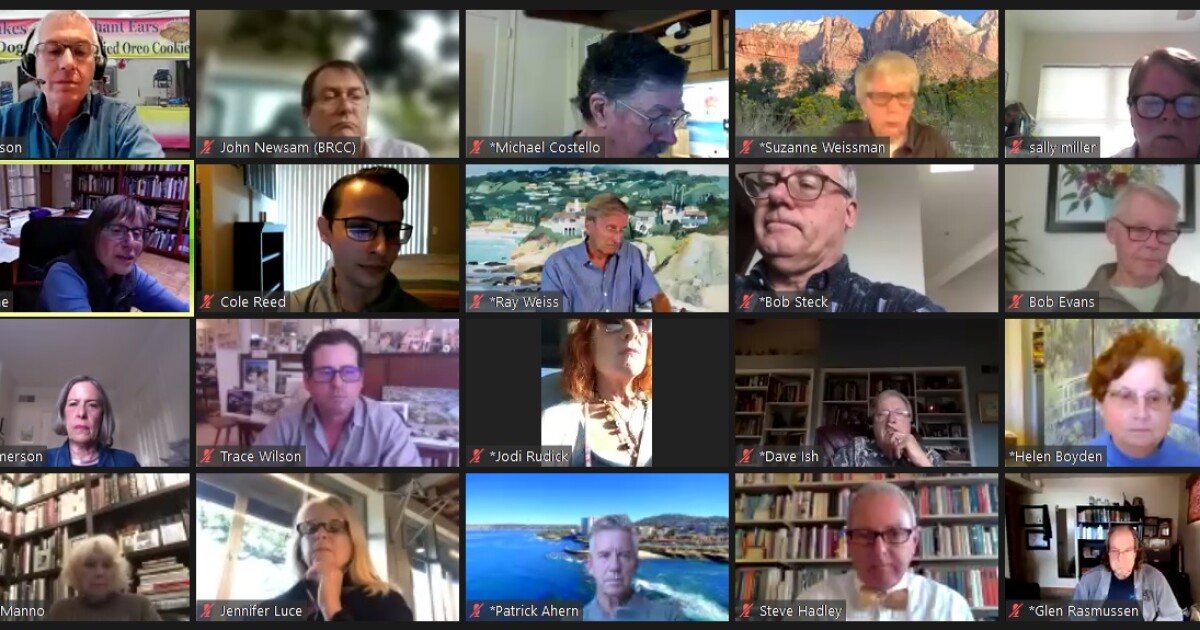 
The La Jolla Community Planning Association voted against the findings of its development permit review subcommittee on a project that would overlook La Jolla Heights Natural Park in the Country Club neighborhood at its meeting on 3 June.

The project in question is a development at 7362 Brodiaea Way, where the applicants hoped their project would essentially meet the terms of a previously approved permit, in what is known as a substantial compliance review.

The DPR approved a previous permit application for the property in December 2018 and the La Jolla Community Planning Association followed suit in February 2019. The DPR then ruled that the amended project was in accordance with the permit previously approved in April. of this year.

The directors of the LJCPA disagreed.

The problem for the trustees was the changes to the project, including relocating a proposed driveway and transforming the garage into a fully underground structure with living space; and the request to process the application as an SCR rather than an amendment to the original permits.

The “main element” that triggered an SCR, said plaintiff representative Roger Sammon of Island Architects, is the garage removed from the slab of the main building and placed at basement level. “It is no longer visible to the public. The driveway has been moved from the highest part of the slope and moved to the south end of the property, ”he said, and the main level includes“ minimal changes ”to the west side, the house retaining a similar imprint.

But the basement would now also include approximately 2,000 feet of living space that would not be included in the floor area ratio measurement (the floor area of ​​a building to the size of the lot). Some trustees deplored the excavation and the related impacts on the surrounding areas with the increase in the area of ​​the basement.

As such, LJCPA administrator Kathleen Neil argued that the project does not meet SCR criteria and should have proposed an amendment to the requested permits.

“The changes made to the approved project involve the digging of a new underground garage and modifications to the stormwater retention [features], “she said.” The front property line of the project abuts the top of La Jolla Height Natural Park, so any change in height, landscape or stormwater flow will impact the fire area. and the area of ​​special biological importance. By requesting that the project be treated as an amendment to the [requested permits] instead of SCR, the LJCPA could send the message that we care very much about development, both public and private, alongside our parks.

Neil asked the board to consider “how much time this group has spent protecting parks from the impacts of the La Jolla View reservoir project,” which would replace a reservoir near the proposed development. The council spent several meetings discussing the project, eventually forming a working group to liaise with the city and find an alternative.

A motion echoing Neil’s position and denying the SCR was passed 14-1, with Administrator Greg Jackson dissenting without comment.

The project will be sent to the appropriate municipal services with the determination of the LJCPA. It is not known if the project will return for further consideration.

Other news from the LJCPA:

The holidays on rue Cuvier are back: The request to release part of Cuvier Street from city property that has made its way around community planning groups in La Jolla has been withdrawn from the LJCPA’s consent program for a full review next month.

The vacations are seen as a necessary part of the renovation of La Jolla Rec Center to help expand its offerings, and have been approved by the DPR committee and La Jolla Traffic & Transportation Board.

Spindrift Drive handrail: Without giving further details, LJCPA administrator Patrick Ahern hinted that ‘traction’ was being gained in the board’s efforts to install a slippery access handrail from the beach at Spindrift Drive next to the Marine Room restaurant.

“After a long delay, in part due to COVID… we are getting traction with the [San Diego] The Department of Transportation and Stormwater, which is responsible for this access, ”he said, adding that a group had formed under the auspices of the La Jolla Shores Association to work with the appropriate municipal departments.

The handrail was approved by the LJSA and LJCPA at the end of 2018 and would have the support of neighbors and lifeguards. In 2019, LJCPA listed the replacement of the handrail as its number one project to be funded by the city.