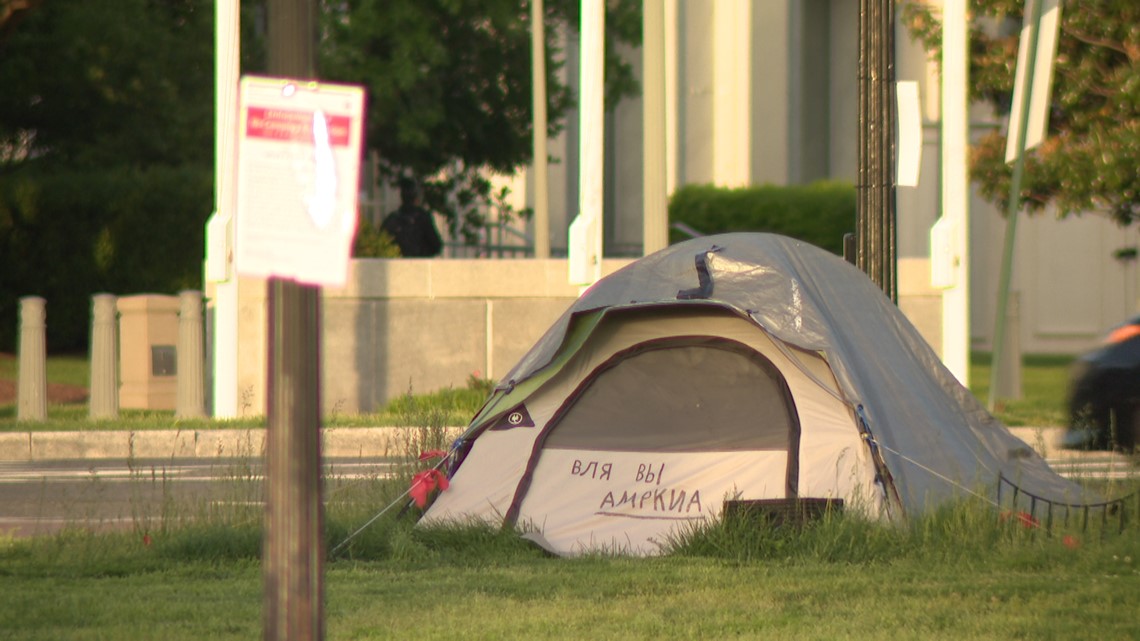 The National Park Service says the camping ban is necessary to address public health and safety concerns at the site.

WASHINGTON — A large encampment between Union Station and the United States Capitol will soon be removed.

Earlier this week, the National Park Service put up signs at Columbus Circle alerting people inside the roughly two dozen tents there that they should move out by 7 a.m. on June 1.

NPS said it had previously suspended enforcement of its regulations prohibiting camping at Columbus Circle during the pandemic.

Now, the agency plans to remove the encampment outside the front gate of Union Station for several reasons.

“The National Park Service has determined that enforcement of the no camping regulations at Columbus Circle is necessary to address public health and safety concerns and unsanitary conditions,” the NPS sign reads.

Camp removal | We contacted the NPS today to see if they have any plans to house those who will be relocated to Columbus Circle, but have not heard back. Their signs said:[enforcement] is necessary to address public health and safety issues and unsanitary conditions.” (@wusa9) pic.twitter.com/1gx3CalrqL

NPS says it will clean up the space, rehabilitate the turf and mitigate local rodent infestation once its application is complete.

Texas native Glenn Lanier has been living in a tent at the site for three weeks after being the victim of identity theft. He admits the camp doesn’t look great. However, he adds, for a man of his advanced age, going to a shelter is not always safe.

“It’s DC’s go-to place, you get out of [Union Station] and you’re supposed to see a better atmosphere than you see with these tents, but you need another place where the homeless can go.

He said he was only asked once by officials to leave the site, for fifteen minutes, when the NPS set up its signs in the area.

“If you just kicked a person out and gave them nowhere to go, that’s hard to understand,” he said.

Camp removal | The National Park Service says people living in tents at Columbus Circle outside Union Station must leave on June 1. @Mariovizcar & I spoke to Glenn Lanier. He’s been there for 3 weeks and says people there won’t have anywhere to go: “It’s a whim” (@wusa9) pic.twitter.com/RVhNeS5D4N