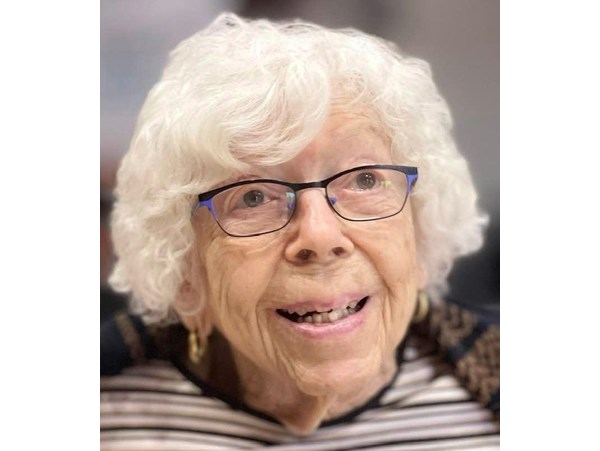 Holding the hands of her two daughters, Constance M. Schmieder, 95, died at Terrace Place in Sheboygan on Sunday, December 12, 2021.
Connie was born to Percy Longfellow and Crescentia (Sauer) Scribner on October 4, 1926. With her younger sister Jean (Harff), the two girls have an idyllic childhood in their Clifton Avenue home. Connie grew up attending Holy Name Catholic Church and School, and graduated from Sheboygan North High School in 1945. She continued her education at Siena Heights College in Adrian, Michigan, before returning permanently to Sheboygan.
During the war years, Connie had many beau with whom she corresponded but she fell in love with the handsome Jim Schmieder, newly returned from service in Europe. She chose him as her life partner, and the two were married in Holy Name on September 3, 1949. Four daughters followed, Lynda (Dennis Eirich) and Cindy (Jim Van Akkeren). Daughters Katherine and Christine both died before the age of one.
Throughout her life Connie has taken great pride in her appearance, always wanting to look her best. In the early years of their marriage, and like a TV episode of the old “I Love Lucy” show, Connie would load a dress, or two, or three at Pranges or Friede’s, then wait for certain confrontation with Jim over the expenses. Finally, she always kept the dress.
In 1967, Connie joined the crowd of women in Sheboygan County who were hoping to be cast as extras in the movie “Winning” on Road America. With the dream of meeting Paul Newman, Connie, perhaps prematurely, went out and bought two velvet armchairs that she had long admired with the intention of paying for them with her “winnings.” As it turned out that she was not selected as an extra and still had to pay for the two chairs, she took a job at Ellingers Agatized Wood where she worked until her retirement in 1986.
The summer family vacation was spent on the Chippewa Flowage where Connie would be captain of the “Snoopy C”. Cigarette in hand, wearing a sailor’s cap and glamorous sunglasses, Connie was spinning her daughters on water skis behind the boat, the cocktail flag waving happily in the bow. Over the years, the cabin has been replaced by an RV, and family trips have taken them across the United States on new adventures. After her retirement, she and Jim moved to a permanent campsite near Montello where Connie had fun doing her favorite activity, meeting and making new friends. While Jim was more of a quiet soul, Connie was in her element and had long conversations with friends that started in the morning and didn’t end until bedtime.
Over the years, they continued to travel with Lynda and Dennis, making numerous trips to Door County where they enjoyed sightseeing, eating, and shopping. Connie was able to take one final trip to Door County with Lynda last summer, enjoying as much as she could despite limited mobility and vision. She still looked forward to the next trip and couldn’t wait to go back.
In 2018, Jim and Connie sold their home on Wilson Avenue, moving into an apartment in Terrace Place. With help from Sharon Richardson Hospice, Jim helped take care of Connie until her passing in October 2019. As it was the peak of the Covid pandemic, the retirement homes were closed, but Connie still has kept his cheerful attitude. She looked forward to the daily phone calls from her daughters and once everyone had been vaccinated she was once again able to enjoy visits from her grandchildren Hannah, Sam and Bram Van Akkeren. Special days
happened when Lynda took her on long car and wheelchair rides along the lake and river, stopping along the way for an alfresco meal, beer or ice cream.
During her last months of life, Connie often wondered what Heaven was like and what Jim did to himself every day. We would like to imagine them there together, cruising in their boat, traveling in their motorhome, laughing and enjoying a cocktail or two.
Connie had been delighted that she had been “asked” to “join this club called Sharon Richardson”, and they had provided her and Jim with a lot of love, care and companionship over the past two years. . The staff at Terrace Place also brightened up each day with compassion and laughter. Thanks to everyone who took care of mom and dad.
Memorials to Sharon Richardson Community Hospice would be appreciated.
The Olson Funeral Home & Cremation Service was responsible for making Connie’s arrangements.
To send a flower arrangement or to plant trees in memory of
Constance “Connie” M. Schmieder, please click here to visit our sympathy store.