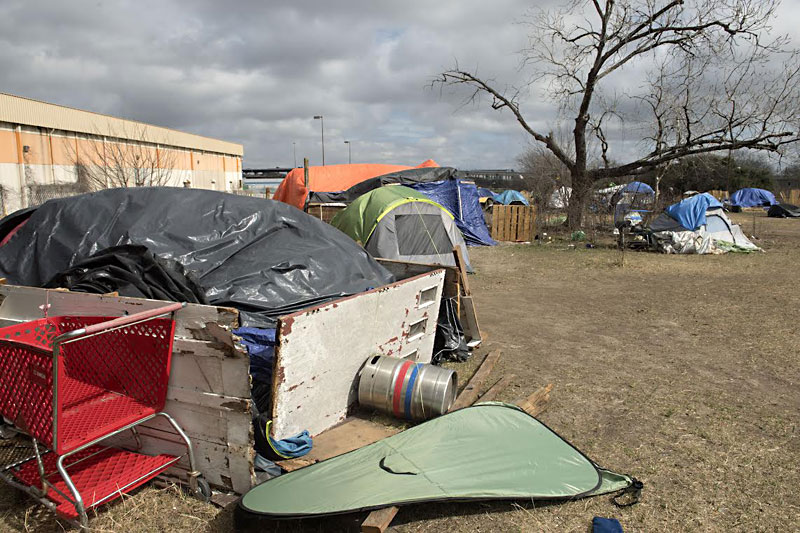 Camp at St. Johns and I-35 (Photo by John Anderson)

On March 25, city staff moved 31 people living in a controversial encampment to St. Johns and I-35 in transitional housing at the Northbridge and Southbridge shelters, as part of the HEAL (homeless encampment assistance link) initiative, adopted following the local and state reinstatement last year of a ban on public camping.

For months, the encampment in and around St. John’s Neighborhood Park had caused concern among neighbors. On March 6, police shot and killed a 28-year-old man Miguel Ruiz Rivera, who periodically lived at the camp, after apparently being spotted firing a rifle near one of the tents. At the same time, an outpouring of generosity from residents seeking to help homeless neighbors inspired multiple fundraising drives and sustained volunteer efforts to feed, assist and ultimately house campers before the city intervene.

“I have to give props to the community,” said a council member Chito Vela, whose District 4 includes St. Johns. In an interview with the the ChronicleVela stressed that the efforts of volunteers, as well as luck, were important in ensuring that homeless residents could move from camp to transitional housing, citing support groups like the Small alliance of petals. “It’s so nice to see everyone moving to better accommodations and seeing the park feel like a park,” he said. Others involved in relief or mutual aid efforts at the camp included Austin Area Urban League, Community Resilience Trustand Stop swipes.

In February, during his first days in office, Vela’s office successfully intervened to delay a planned cleanup of the camp due to freezing weather. The city one Homelessness Strategy Office had initially declined to make the camp one of its designated HEAL sites, which left volunteers struggling to find options. And then, suddenly at the end of March, the city reassessed the site. “Honestly, I think what triggered the scan change and made it a HEAL cleanup was the shooting,” Vela said.

While the HEAL initiative prioritizes camps that pose the greatest health risks to residents and neighbors, a city spokesperson would speak only in general terms about the reasons for the move. “The City of Austin collects and receives information about encampments on public lands … and regularly monitors and closes sites,” they told us. “While ODA officers [can] enforce state and local camping ordinances at all times, the [number]the size and complexity of these sites often require the coordination of a variety of municipal departments to resolve larger encampments.”

Do you have something to say ? the the Chronicle welcomes opinion pieces on any topic from the community. Submit yours now at austinchronicle.com/opinion.