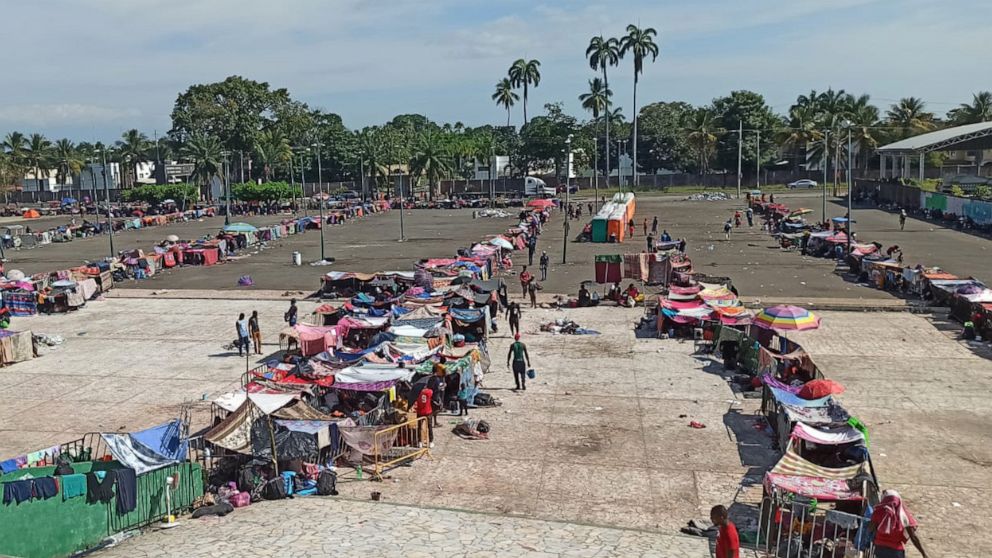 Ruben spent four years in Chile working as a cleaner in a hotel and despite his experience in the hospitality and tourism industry, he was unable to secure a better paying job. Originally from Haiti, he said he was ignored for promotions and paid higher rent than lighter-skinned immigrants.

After years of financial hardship and with the pandemic affecting the tourism industry, he decided to migrate to Mexico, where he said he now faces the same xenophobia he tried to flee. He has been in Tapachula, Chiapas, for three months waiting to be interviewed for a humanitarian visa.

“The situation is very difficult for all migrants, not just Haitians, there is no hope here,” he told ABC News in an interview conducted in Spanish. “There is no work and they don’t want to give us our papers. All we want to do is leave Tapachula and be in another town while our cases are being processed.”

Ruben is among tens of thousands of migrants whose asylum claims appear to have stalled as Mexico’s leading refugee agency processes unprecedented numbers of humanitarian visa applications.

Human rights organizations warn that while waiting for their case to be processed, migrants have become easy targets for price gouging and criminals who rip them off by promising them a way out of town. As the Mexican government puts increasing pressure on migrants to prevent them from continuing north out of the state of Chiapas, migrants said they were forced to live in makeshift shelters on the streets and in overcrowded houses.

ABC News is not reporting Ruben’s real name in order to protect his privacy as he waits to see if he will receive protection under a humanitarian visa.

Tapachula is known as the main port of entry for refugees to Mexico as it borders Guatemala. Yet the number of asylum claims at the end of November is unprecedented. According to COMAR, the Mexican government agency that processes refugee status, at least 123,187 claims have been filed so far in 2021, surpassing the 2019 record of over 70,000. The majority of those claims, 73 %, were filed in the state of Chiapas. Haitians are the main demographic for asylum seekers in Mexico, the agency said.

Andrew Bahena, who works with the international programs team of the Coalition for Humane Immigrant Rights in Chiapas, has documented cases of discrimination and violence targeting the migrant community. Migrants are relegated to renting rooms in overcrowded and unsanitary conditions. These disparities are accentuated for darker-skinned migrants like Haitians, the coalition said.

“If you are a migrant and you only pay per person, there is a certain stock of housing that you are going to live in, and it is really difficult to rent anywhere once people understand that you â€œYou are a foreigner,â€ he said. â€œIt happens with food where people are charged more for the same kilo of rice. The problems get worse as the system stops functioning. “

As the main national agency for refugees, COMAR is the only entity capable of granting refugee status and issuing travel documents that allow migrants to move freely within the country. Agency director Andres Ramirez said they were able to process up to 5,000 cases per month, less than a third of claims filed in November alone.

â€œThis year’s wave has been massive,â€ Ramirez told ABC News in Spanish. “In addition to the large quantity, some people who do not fit the profile of a refugee as the law establishes have submitted applications because they have no other immigration alternatives.”

The United Nations High Commissioner for Refugees, or ACNUR, as it is known in Mexico, has helped the Mexican government provide aid and temporary accommodation in three local shelters in Tapachula. Josep Herreros, senior protection officer for UNHCR, believes the city’s congestion can be alleviated by providing alternatives to people who do not qualify for refugee status but still need help.

â€œPeople are suffering from congestion,â€ Herreros told ABC News in an interview in Spanish. â€œThis flow is what we call a mixed movement, where we have refugees who need protection and other migrants who have other needs. We believe that it is important to offer alternatives to the asylum process.

As another way to reduce traffic jams in Tapachula, the National Migration Institute has taken some migrants by bus to other towns where they can continue their asylum process.

Buses left the Olympic stadium, but Arturo Viscarra, an attorney for CHIRLA, said these efforts have slowed down and thousands have descended on the area. On Monday, Viscarra filmed how countless people took shelter from the sun in makeshift shelters outside the stadium.

â€œThere is this complete lack of response,â€ Viscarra said. “This is both the result of policies with the combination of racism that makes it harder for Haitians to get jobs and housing.”

The National Migration Institute did not respond to ABC News’ request for an interview.

Government checkpoints have been established outside the city and on Mexico’s main highways, making it difficult for migrants to leave without the threat of deportation.

In recent months, groups of migrants sometimes referred to as “caravans” have formed in an attempt to bypass checkpoints and continue further into Mexico, some hoping to reach the US border, according to CHIRLA. In September, the U.S. border patrol was embroiled in national controversy when footage was released showing patrol officers on horseback using their horses to repel Haitian migrants as they attempted to cross the Rio Grande to Del Rio. , in Texas.

Ruben said he cried upon seeing the footage and was disappointed with the way the United States is treating Haitians. He has also become increasingly frustrated with the asylum process in Mexico, but his dream is to move to Mexico City and work in the tourism industry.

â€œI’m not trying to go to the United States, that’s not where I can have a better life,â€ he said. “I am looking for a place to live in peace. If I can fulfill my dream here in Mexico and have a good job, I will stay here.”