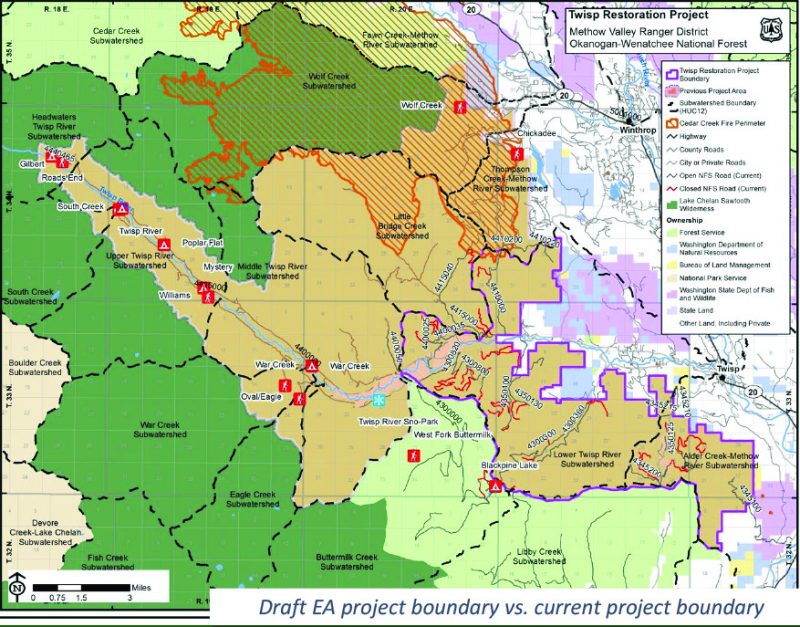 After nearly 14% of the Twisp Restoration Project (TRP) area burned in last summer’s Cedar Creek Fire, the Methow Valley Ranger District has dramatically reduced the project’s footprint so that it can begin slimming and restoration as soon as possible – potentially this fall.

The footprint has been reduced from 77,000 acres to about 24,000, Methow Valley District Ranger Chris Furr said in an online town hall meeting Wednesday, January 26. The Cedar Creek Fire burned approximately 10,600 acres of the original proposal.

Catchments affected by the fire (either by burning or by extinguishing measures) were not taken into consideration. The need for treatments in these watersheds could be included in a future project, Furr said.

Although most areas affected by the fires have been cleared, approximately 100 Acres near Thompson Ridge are still included and will be treated with thinnings and prescribed fires, district silviculturist Eireann Pederson said at the meeting.

The new footprint encompasses the lower Twisp River watershed west to Buttermilk, Blackpine Lake, the Alder Creek area and part of Thompson Ridge. The original boundaries also included the upper Twisp River watershed and Wolf Creek. Since most effects are analyzed at the watershed level, dividing the project along watersheds allowed for efficiency in updating the environmental analysis, Furr said.

Thinning could result in up to four timber sales over three years or, depending on the economy and other factors, more small sales, Furr said. The new diet also shortens the staggered treatment schedule from 30 to 20 years.

The ranger district and the North Central Washington Forest Health Collaborative met in November to discuss their options. They considered two approaches: keeping the same boundaries and assessing fire impacts as part of the overall environmental analysis; and eliminating watersheds burned in the fire and relying on the original analysis for unaffected areas

They chose option 2 because it allows the district to start urgent projects sooner to address wildfire risk, as they won’t need to reassess affected areas and update reports, Furr said.

One of the drawbacks of the second option is that it defers some major aquatic work, although some aquatic treatment may be carried out as part of the Pacific Northwest Region Aquatic Restoration Project, which is currently underway. development and will have its own environmental review, Furr said.

The district received nearly 1,000 comments in late 2020 and amended the TRP to address some of those concerns, Pederson said.

“I think we heard you loud and clear about changing the maximum diameter limit over which we would remove trees,” Pederson said. The district reduced the maximum diameter to 21 inches. The proposal allows trees to be thinned up to 25 inches if their health is compromised, she said.

The district will not do any commercial harvesting of old-growth forests, although it will do thinning and other forest health treatments, she said.

In response to feedback, the district eliminated a proposal to add new trails near Chickadee and all-terrain vehicle routes. They still plan to close the Road’s End four-site campground, which burned badly in the 2018 Crescent Mountain Fire, but will add campsites to other Twisp River campgrounds to compensate for the closure, said Pederson.

Most of the areas burned in the Crescent Mountain Fire are no longer part of the nomination. Therefore, salvage cutting of trees burned in this fire is not part of the revised plan. The reduced project area also does not include any late (old) succession reserve or listed roadless areas.

Details of road and trail modifications will be included in the environmental scan. Roads constructed or reopened for access during the project will be decommissioned or closed thereafter.

Current conditions in the Twisp River watershed are well below standards for a healthy stream system, said district biologist Gene Shull. Ideally, there would be over 550 pieces of wood per mile, from 6 inches to a large diameter, but the watershed only has about 80 pieces per mile. Woody debris adds complexity to rivers, providing habitat for endangered fish.

The district has acknowledged the effects on the Twisp River corridor. “One of the impacts for this important work to be done is increased traffic during the three years that these lumber sales are open,” Furr said.

Members of the public asked about the risk of forest fires caused by slash piles left in the forest after thinning. The district hopes to bring in contractors or U.S. Forest Service employees from other areas so they can burn the piles during the short safety window, Furr said. Transporting the slash is very expensive and burning it provides nutrients to the soil, Pederson said.

The district is open to coordinating with other projects in the valley that may be able to use the slash, including the Methow Beaver project and the C6 Forest to Farm biochar project, Furr said.

The district anticipates funding from multiple sources, including the federal infrastructure bill and lumber sales, Furr said. The Okanogan-Wenatchee National Forest will be designated a priority forest in Washington in fiscal year 2022, although they don’t have details yet, he said.

The district is currently finalizing the environmental analysis, which will outline changes to the original TRP proposal and include detailed maps. They expect to release the environmental scan this spring for a 45-day objection period. The municipality hopes for a decision signed this summer, with the possibility of starting some work this fall.

A recording of the meeting and a PowerPoint presentation with maps of the revised area are available under the “Analysis” tab on the Forest Service website at https://www.fs.usda.gov/project/ ?project=56554.