Why the South of Scotland should be on your staycation wishlist

It’s one of Scotland’s most beautiful areas, but Dumfries and Galloway are often overlooked by day-trippers and holidaymakers. Those who make it their destination, however, are well rewarded, as it has beautiful beaches, picturesque villages, a spectacular coastline, castles, museums and a whole range of sporting activities from mountain biking to golf.


Castle Douglas is a designated food town, but fine food and drink can be found throughout the area with cafes, restaurants and distilleries all part of the Tempting Flavor Route. The fresh air means daylight has a quality that attracts creative people, with the result that Kirkcudbright is now known as the city of artists. The lack of light pollution also led to the creation of Western Europe’s first Dark Sky Park.
The beauty of the surroundings inspired Robert Burns whose final resting place is in Dumfries where the Robert Burns Center tells his story. Wildlife is attracted to the unspoiled countryside and nature lovers can enjoy the RSBP Mull of Galloway Reserve and Caerlaverock National Nature Reserve where barnacle geese, whooper swans and osprey can be seen. Among the ruined romantic abbeys is Sweetheart Abbey, where Lady Devorgilla was so heartbroken by the death of her husband that she took his heart with her until her death.


Whether it’s culture, cuisine, history, nature or sport, Dumfries and Galloway has them all covered. It opened the first dark sky park in the UK and Western Europe and now the area has a new visitor center and Dark Space planetarium. Based in the artists’ town of Kirkcudbright, it aims to build on Galloway Forest Park’s Dark Sky status, granted in 2009 and recognizing it as one of the best places for stargazing in the world.


The £2.6million Dark Space Planetarium opened last summer and is a state-of-the-art experience designed for all ages. The exhibition space contains science and space themed interactive exhibits and visitors can also enjoy the Planetarium’s immersive domed cinema screen, take virtual journeys to the far reaches of the universe, explore inside the human body and travel around the Earth.


WHAT IS YOUR TIPPLE?
Also new is the Dark Art Distillery in Kirkcudbright, which offers tastings and tours. It is Scotland’s most southerly distillery and was founded by Andrew Clark-Hutchison whose family has lived in Dumfries and Galloway for generations. The distillery’s gin is still named Peggy, after Clark-Hutchison’s grandmother from Kirkcudbright, and can be seen on tours that include a tasting of the distillery’s Sky Garden Gin.
Whiskey lovers should head to the Annandale Distillery, first opened in 1836 but closed after World War I as the site fell into disrepair. A £14million makeover started by Teresa Church and Dumfries-born David Thomson culminated in it reopening in 2014.
With its rugged coastline, the area has its fair share of lighthouses and now there are exciting new ways to tour them by boat or e-bike. Lighthouse Boat Tours depart from scenic Portpatrick Harbour.
From the sea, it is possible to experience the majesty of Galloway’s lighthouses as they were designed to be seen, with their striking silhouettes standing guard to warn of rocky outcrops and cliffs. Exploring the Rhine lighthouses by e-bike is also a fantastic way to make the most of the scenic coastal scenery as well as quiet country roads. The bikes can be hired for half a day, a full day or several days and are adjusted for each rider with full instructions on how to use them.

NEW PERSPECTIVES
Designed by renowned landscape artist Charles Jencks, the Crawick Multiverse is an incredible land art installation near Sanquhar. Nestled in the hills of Upper Nithsdale, this major land restoration project has transformed a former open pit coal mine into a spectacular artland and public amenity. The ecology of the site and the materials found there inspired its design, based on space, astronomy and cosmology. A climb to the Belvedere, the highest point, offers spectacular views not only of the site itself, but also of the surrounding valley and beyond. Around 2,000 boulders were used to create Crawick Multiverse and the project spans 55 acres. It received the Tripadvisor Travellers’ Choice Award.
Wanlockhead’s Museum of Lead Mining sits in the middle of the Lowther Hills, directly on the Southern Upland Way, and is a four star VisitScotland attraction. Visitors can take an underground tour of the 18th century lead mine and gain insight into the past by visiting the miners’ cottages to see how the miners and their families lived. The Miners’ Library is one of three subscription libraries in Scotland set up by miners themselves. Due to its importance, the Scottish Government has granted it Recognized Collection status. It is also possible to go in search of gold during the opening season of the museum. Licenses are available as well as gold panning equipment for prospecting in local waterways.


Animal lovers are spoiled for choice in Dumfries and Galloway. Those wishing to experience a working farm can sign up for a tour to Kitchen Coos & Ewes near Newton Stewart to see Highland cows and Beltex sheep. Visitors can get up close to the animals in the safety and comfort of a specially designed trailer on a farmer-led Highland cow safari. The tour ends with homemade pastries fresh from the farmhouse kitchen.
Dalscone Farm Fun near Dumfries is another great destination for families, with a large indoor playground and farm park fun, while Cream o’ Galloway near Gatehouse of Fleet offers crazy golf, craft workshops ice cream, cheese-making lessons, nature trails and farm visits.
Galloway Activity Center is in a stunning location on the shores of Loch Ken, in the heart of the UNESCO Biosphere of Galloway and South Ayrshire. It offers a range of land and water activities and water sports lessons for families, individuals and groups. Well-equipped facilities offer everything from lessons and equipment hire to accommodation and vacation packages. Throughout the year there are Initiation Sessions which are instructor led half day activity sessions designed to be a fun introduction to activities such as kayaking, sailing, windsurfing, archery, mountain biking, outdoor laser fighting games, rock climbing and water park fun. The center also has Scotland’s first 40ft swing, which can be enjoyed as part of the half day climbing and high ropes course.

Nestled just seven miles from the Anglo-Scottish border, Devil’s Porridge Museum is dedicated to telling the story of how this once quiet region became a hub of wartime activity. Visitors can experience what life was like for soldiers in the trenches of WW1 and the thousands of Munitions Girls who flocked to work at HM Factory Gretna.
The Second World War exhibition focuses on local female munitions workers, RAF fighter pilots, female munitions depot workers and the advent of Cold War and nuclear age Scotland. Donning a state-of-the-art VR headset, you can also see inside a UK nuclear power station where plutonium and tritium were produced for the atomic bomb.
Walk through the story of a beloved children’s book in a home that lives and breathes storytelling. Scottish author JM Barrie lived in Dumfries from 1873 to 1878 and often visited Moat Brae where the gardens were for him “enchanted lands” and inspired the world of Peter Pan. A dedicated group of local people, led by the group Peter Pan Action, came together in 2009 and pledged to find a way to keep JM Barrie, Moat Brae and Dumfries, his childhood hometown, safe. vanguard of children’s literature.
After 10 years of fundraising, their vision, hard work and unwavering commitment culminated in the reopening of Moat Brae as an all-ages literary destination in 2019. 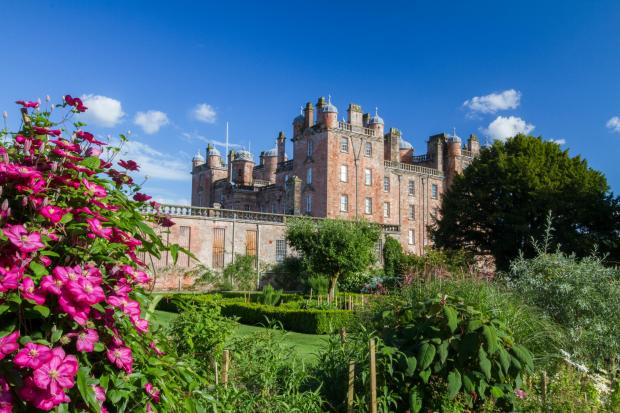 THE GREAT OUTDOORS
Set in the 120,000 acre Queensberry Estate, with country parkland and Victorian gardens, 17th century Drumlanrig Castle is one of the most important Renaissance buildings in the country with magnificent rooms and spectacular collections of silverware , porcelain, French furniture and art – including Rembrandt’s Old Woman Reading.
The many trails, which range from 1.5 km to 7 km, follow an extensive network of paths and tracks and can be explored on foot or by mountain bike. There’s a trail to suit all abilities and interests, from technical single-track routes to family swooping routes through the beautiful forests of Drumlanrig to scenic country lanes. Bike and trailer rentals are available. Children can also enjoy the adventure playground.