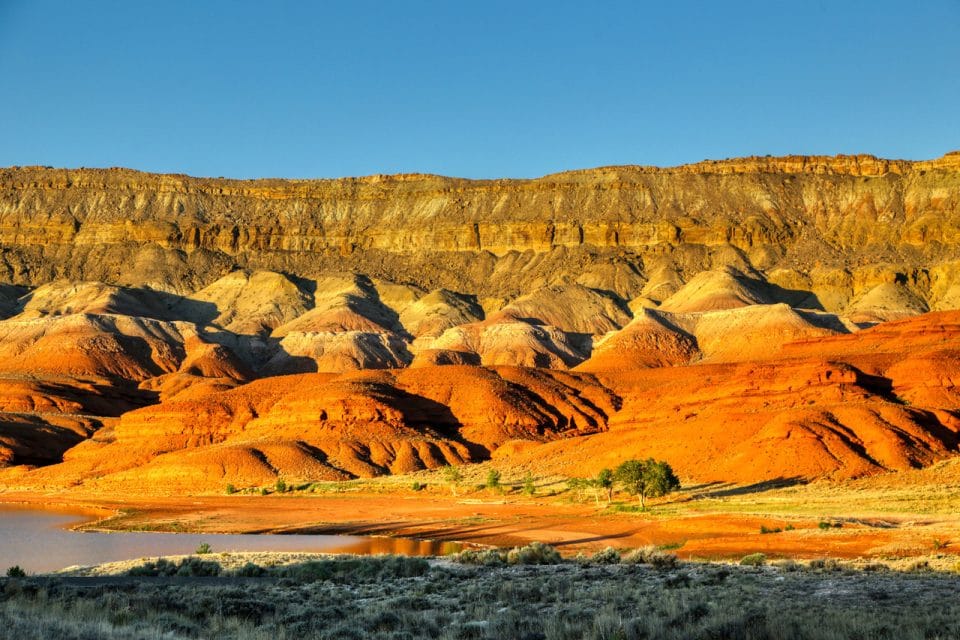 Campground Views: A sunrise view of the spectacular scenery of the Bighorn Canyon National Recreation Area, viewed from our campsite in the Horseshoe Bend Campground near Lovell, Wyo. The boundless natural beauty of the National Recreation Area offers beautiful scenery, wild horses, a large population of wildlife, as well as boating, fishing, camping, hiking, and other outdoor activities. Photo by Gary Warren / ladailypost.com

While you are reading this article, we will be in Texas again to visit Marilyn’s parents before heading to West Texas and Big Bend Country.

Editor’s Note: Longtime Los Alamos photographer Gary Warren and his wife Marilyn travel the country and share his photographs, which appear in the “Posts from the Road” series published in the Sunday edition from the Los Alamos Daily Post.

Lagoon and Pier: We have visited Dead Horse Ranch State Park near Cottonwood, Arizona on several occasions. The park includes three lagoons and acres of tall poplars. Pictured is a grove of poplars reflected in a lagoon as two men fish from a jetty during a visit to the park in February. Photo by Gary Warren / ladailypost.com

Davis Mountains State Park: Davis Mountains State Park in West Texas is near Big Bend National Park. Photo shows our campsite in this park in January 2021. The park is conveniently located near Fort Davis National Historic Park and Historic Fort Davis. Davis, Texas. Also located a few miles from the park is the McDonald Observatory which is a wonderful place to visit and visit. The observatory offers evening programs where visitors can observe the night sky through several of the facility’s telescopes. We have toured and enjoyed the shows in the past, but many shows were canceled in 2021 due to COVID-19. Photo by Gary Warren / ladailypost.com

Fish Creek Hill Viewpoint: We love to visit the Phoenix area each year in March during Major League Baseball Spring Practice. Each year on our spring tours we have time to explore the area and enjoy the desert before the summer heat sets in. In 2021, we hiked the Apache Trail through the Superstition Mountains just east of the Phoenix metro area. Shown is a view from the Fish Creek Hill lookout several miles uphill from the Apache Trail last March on a rare cloudy and rainy spring day in the desert mountains. Photo by Gary Warren / ladailypost.com

White ibis: A white ibis stares at the photographer as it wades through the swamps of Brazos Bend State Park in Texas last January. The State Park is a short drive southwest of Houston and is a nature lover’s paradise. Brazos Bend State Park has over 300 species of birds, both resident and migratory, as the park sits on a fly migration route near the Texas coast. Six lakes in the park attract birds as well as American alligators, turtles and a variety of wildlife. Photo by Gary Warren / ladailypost.com